Bedrock underlying upper Moore Creek is Upper Cretaceous undifferentiated sedimentary rocks consisting of interbedded sandstone and shale. The placer deposit occurs in multiple ages of ancestral terrace gravels and in modern stream gravels. The older terrace deposits are inferred to be Late Tertiary to early Pleistocene, based on similarities with other dated deposits in Interior Alaska (Hopkins and others, 1971). Pleistocene fossils (mammoth and horse bones) in the overburden were dated at 36,000 BP with radiocarbon methods (Jeff Kline written communication, 1986).

The principal heavy minerals identified in concentrates include native gold, cinnabar, scheelite, native silver, tetrahedrite, chromite, magnetite, and zircon (Mertie, 1936; Bundtzen and others, 1987, 1988; McGimsey and others, 1988). Concentrates from mining contain up to 35.00 percent chromite, i.e., a low grade chrome resource. A mineral separate of screened, minus-28-mesh material from a 100-kilogram, bulk sample of gravel contained 2,300 parts per million (ppm) chromium, 5,200 ppm titanium, 70 parts per billion (ppb) palladium, 200 ppm nickel, and 8.25 percent iron (Bundtzen, Laird, and Lockwood, 1988). Although the nuggets contain abundant quartz rock, the tailing piles are remarkably lacking in quartz. However, abundant large agates occur, derived from the volcanic rocks in the area. A piece of cinnabar was found with agate attached (S. Herschbach).

The source of the gold is probably a mineralized monzonite intrusion and associated contact zones about 1.2 mi (2 km) northwest and upstream from the placer deposit (see AMIS 730057, Broken Shovel). Gulches converging on the intrusion have all been mined for gold. The northeast trending Iditarod-Nixon Fork fault forms the southern structural boundary of the intrusion. It is postulated that the Late Tertiary to possibly Late Pleistocene placer deposits at Moore Creek may have been successively offset right laterally by transcurrent movement along the fault. This would make the deposits progressively younger to the northest (Bundtzen and others, 2004). Many of the large gold/quartz specimens have monzonite attached, indicating a source within the intrusive. Some specimens have more black tourmaline attached than quartz indicating a possible association with tourmaline zones within the monzonite intrusive. 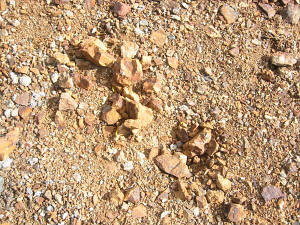 The Broken Shovel prospect consists of a N20 deg. E-trending, steeply dipping quartz-dolomite sulfide vein hosted in medium grained monzonite of the Late Cretaceous 68.9 Ma Moore Creek pluton. The vein is about 5 ft (1.5 m) wide and can be traced for at least 660 ft (200 m) along strike. The vein walls have been sericitized and a pocket of tourmaline is located near the southwest end of the vein. Grab samples contained 555 ppm (16.2 oz/ton) silver, 1.6 ppm gold, 4,860 ppm copper, and 1,430 ppm lead. Visible gold, arsenopyrite, scheelite, and lead-antimony sulfosalts have been identified in hand specimen (Bundtzen and others, 2004). Inferred resource: 15,980 tons (14,500 tonnes) grading 150 gm/ton (4.4 oz/ton) silver and about 1.0% combined base metals (Bundtzen and others, 2004).

Inferred resource: Minimum of 11,000 cy (8410 cu m) of gravel with potentially significant gold content. An unknown amount of gold remains in the 1.5 million yards of tailings. Much of the tailings are worthless stacked overburden, but others appear to contain significant amounts of recoverable gold. A 9 yard sample of one tailing pile run through a 6″ suction dredge in 2004 averaged 0.023 oz (0.72 gm) per cu yd while another 9 yard sample of another tailing pile averaged 0.012 oz (0.37 gm) per cu yd.

Full Metal Minerals and Highbury Projects have been engaged in hardrock exploration on the property since 2006. Trenching below the Broken Shovel prospect in 2007 discovered widespread gold mineralization, with high assay returns from two distinct zones. The Troy Zone is typified by quartz veins with strong coarse gold mineralization within a broad, lower grade zone. Assays from this zone ran as high as 88.5 g/t Au over 0.2 meters occurring within a 3.0 meter channel that averaged 7.6 g/t Au. The Spring Zone is right at the base of the hill and is made up of sheeted quartz-tourmaline veins with coarse gold and disseminated sulphides. Seven trenched spanning 300 meters of strike length were completed, and all contained gold mineralization across the full length of the trenches. Trench 20 averaged 8.86 g/t Au over 11.0 meters. See details at the Full Metal website and a close-up photo of Spring Zone mineralization. Follow-up drilling in 2008 had indeterminate results due to the highly fractured nature of the host rock and other difficulties encountered during the operation. Operations since have been hampered by the severe economic downturn.

Geology of the Iditarod C-3 Quadrangle, Alaska – T.K. Bundtzen, G.M. Laird, and M.S. Lockwood., 1988 – A summary of the geology and mineral resources along a 32 km (20 mi) segment of the Nixon-Iditarod fault in the central Kuskokwim Mountains of western Alaska. Alaska Division of Geological & Geophysical Surveys Professional Report 96, 13 pages.

Geologic map of the Iditarod C-3 Quadrangle, Alaska – This is the color geologic map and sampling results that accompany the report above. Excerpts below. Important Note: this map is in .sid format which requires that the LizardTech ExpressView Browser Plug-in (MrSID) to be installed before you will be able to view it. The map is a 12MB download.

Geology of the Iditarod C-3 Quadrangle, Alaska – Bundtzen, T.K., Laird, G.M., and Lockwood, M.S., 1985, Geology of Iditarod C-3 Quadrangle: Alaska Division of Geological & Geophysical Surveys Public Data File 85-6, 39 pages. This is the preliminary report from which the Professional Report and map above were prepared. Information on the map is included in the text of this document. 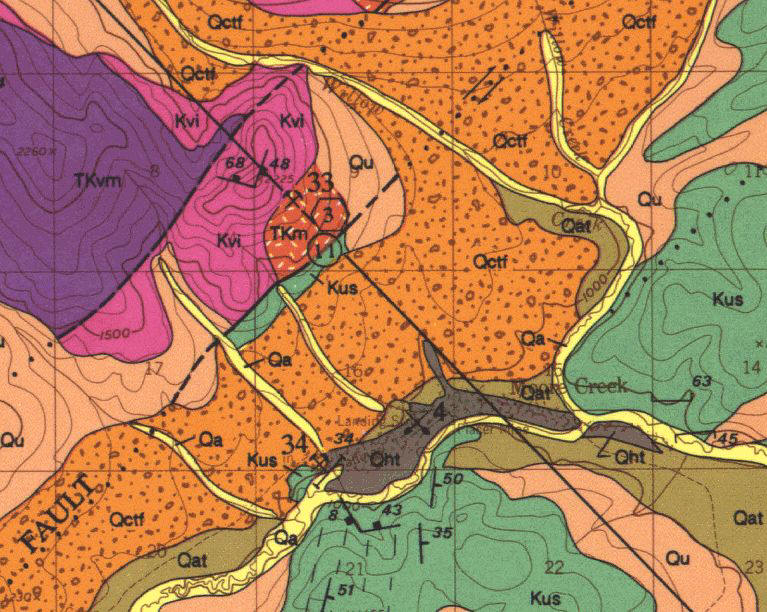 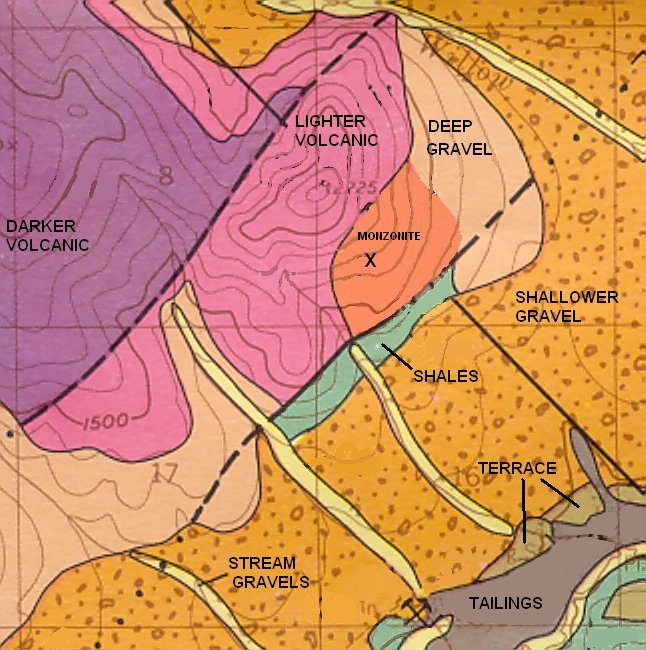 There's gold,
and it's haunting and haunting -
It's luring me on as of old -
Yet it isn't the gold that I'm wanting
So much as just finding the gold.
It's the great, big,
broad land 'way up yonder;
It's the forests where silence has lease;
It's the beauty that thrills me with wonder;
It's the stillness that fills me with peace.