Gold was discovered on Nevada Gulch, a short tributary of Moore Creek in 1910 (Maddren, 1911) and the Discovery claim on Moore Creek was staked in 1911 (Mertie, 1936). Shallow deposits were worked by opencut scraper and hand methods in the first 20 years of operation. In 1913, some ground was being prepared for a dredge; however, a dredge never operated on Moore Creek. In 1927, a Northwest dragline, one of the first in southwest Alaska (Smith, 1931) was brought into the district for exploration, development, and mining.

By the 1930s, mechanized placer mines equipped with draglines and bulldozers dominated activities in the district. The dragline stacked tailings in regular, linear tailing piles up to 6 meters high down the valley of Moore Creek. In the mid-1930s, the USSR&M company initiated a churn drill program in Moore Creek basin with the idea of developing ground for a large-scale dredging operation (Smith, 1937).

Large scale mechanized mining was nearly continuous until Statehood and then intermittent through 1986. Small scale exploration and development activities continued through 2001. From 1911 to 1986, at least 53,990 ounces of gold and 12,520 ounces of silver have been produced from the Moore Creek Mine (Bundtzen and others, 1988; Miller, Bundtzen, and Gray, in press).

About 1,383 ounces of gold and 64 ounces of silver have been produced from nearby Nevada Gulch, mainly from 1911 to 1929. Beginning in the early 1930s, Gus Uotila, Charlie Uotila, John Ogriz, and Elmer Keturi operated the first bulldozer-based placer mine and established Moore Creek Mining Company. More than 70 percent of the total historic production occurred from the mid 1930s to about 1955, when a highly successful dragline/bulldozer plant operated by Elmer Keturi and Jules Stuver mined the deposit.

Annual production ranged from 2,000 to 6,500 ounces of placer gold throughout the 1930s and the 1950s (unpublished U.S. Mint records). From 1933 to 1937, the Moore Creek Mining Company was the largest producer of gold in the Iditarod District (Smith, 1936, 1936, 1941 [B 926-A]). The best year of production was 1937 when 6,500 ounces of placer gold was produced. Moore Creek Mining Company also found abundant cinnabar during mine operations (Joesting, 1942). Work in the 1980s concentrated on recovering coarse nuggets from tailing piles. Early dragline operations did not have nugget collectors and coarse nuggets have been found in tailings in recent years.

1914 – Same as above. Plus, Claim #5 above Discovery has two men working and Bench Association & Fraction has four men working. Sandstone and shale bedrock, creek claims have 10 feet of cobbles ranging from 6″ to 36″ in size. On benches 3 feet gravel with 2 feet clay and vegetation. Water from Willow Creek brought to bench, impounded, with head of 20 feet. Concentrates contain cinnabar, zircon, and little magnetite.

1915 – Two plants, one in the creek and one on the B & C Association, were operating in 1915. USGS geologist J. B. Mertie picks up vein quartz carrying gold on the hills north of Moore Creek. (D)

1916 – Claim 5 above Discovery most productive creek claim. Along the east bench of Moore Creek, opposite claims 1 below to 6 above Discovery, the Alaska association of eight claims was located, and still farther east on the bench were the B & C and OK associations. (D)

1920 – Keller and Dawson continued hydraulic operations on their ground on Moore reek, a tributary to the Kuskokwim River. They employed a crew of about six men. This camp lies about midway between Iditarod and Takotna and near the trail at present used between these two points. The ground is shallow and the situation generally favorable for hydraulic operations. (A)

1923 – Dawson and Keller, with 6 men employed, hydraulicked on the B&C claim on No. 6 Pup. The deposit on this claim averages 10-12 feet in depth and contains no boulders. Material is piped into the head of boxes and tailing is stacked at odd intervals with a giant. In 1922, when the average depth of ground was 11 feet, 120,000 sq. ft. was mined in a season of 122 days and at a cost of 15 cents per sq. ft. or 37 cents per cu. yd. The wages paid at this property $8 and board for 10 hours. Board costs $3.50 per day. In 1923 the cost of mining was about 50 cents per cu. yd. Prospecting conducted during the summer demonstrated that the pay streak continues a full claim above the present operations. A new 3-mile ditch was constructed during the season. F. Boushau and Paul Reimer were groundsluicing in the vicinity. The gold output from Moore Creek in 1923 was about $20,000. Moore Creek is 42 miles east of Flat by trail. Summer rates by pack train to this camp are 25 cents per pound; winter rates by dogteam are 8 cents per pound. Wages in the Iditarod district are $6 to $7 per 10-hour day and board. The cost of boarding is $3 to $3.50 per man day. (B)

1924 – Continued operations on No. 6 Pup successful even though problems with new ditch.

1926 – Mr. Barlow stated that it was his hope to get Guinan and Ames interested in dredging Moore Creek. In this connection the drilling that has been done on Moore Creek, prospecting for dredging, has been done by an associate of Mr. Guinan’s, W. G. Glass. (I)

1927 – A Northwest dragline, one of the first in southwest Alaska (Smith, 1931) was brought into the district for exploration, development, and mining.

1933 – One plant was operated in 1933, working a cut on claim 5 above Discovery, where 30,000 square feet of bedrock was cleaned. This plant employed five men. Largest placer gold producer in district. (D)

1937 – The Moore Creek Mining Company, a new operation, is mining with dragline and bulldozer on Moore Creek, a tributary of the Takotna River. This company has 14 claims and a fraction and is owned by Charles and Gus Uotila, Elmer Keturi, and John Ogriz. Moore Creek is located 37 miles east of Flat. They have an airplane field 1250 x 100′, costing $3,000. Thus far 130,000 bedrock feet have been cleaned. The ground runs between 30 and 50 cents to the bedrock foot. This is the second year of operation for this company, however, this is the first year with dragline. The Fairbanks Exploration Company drilled with four men and airplane drill on Moore Creek, half a mile below the holdings of the Moore Creek Mining Company. On date of visit the drill had been moved to Fourth of July Creek. Largest production year. (N)

1938 – Uotila & Ogriz have been operating their dragline on Moore Creek. They have ? men employed. Reports were that they have been severely handicapped by a deep overburden and not doing as good as expected. (F) 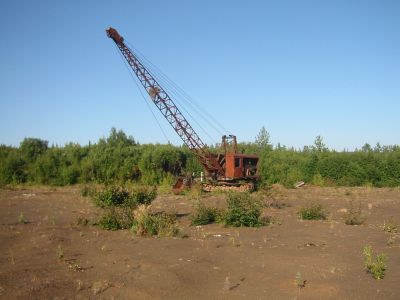 1939 – The Moore Creek Mining Company on Moore Creek, 30 miles east of Flat was reported to have 12 men employed. To date this year, they have produced $47,000, as reported by the management. This company has the advantage of considerable thawed ground and is expected to do exceptionally well this season. The company has purchased a new 5-inch Kirk-Hillman drill which is being operated this season with 3 men. (G)

1940 – The Moore Creek Mining Company was reported as having a very successful season. They maintain a crew of 12 men and to date this season they have had a production of over $100,000. (H)

1946 – The Moore Creek Mining Company, located 30 miles east of Flat, is operating a dragline and bulldozers under the management of Elmer Keturi with a total of eight men employed. Mining by this company continues to reveal several coarse gold nuggets with quartz attached. The company was reported to have about reached the end of it’s pay. (E)

1959 – Jules and Joe Stuver of Flat have hydraulic operations on Moore Creek. (C)

1988 – The Iditarod-Nixon Fork fault juxtaposes a thin 2,200 m thick section to the northwest against a much thicker (>5,000 m) turbidite dominated section in the southeast. Faint escarpments along Bonanza Creek suggest Quaternary activity. Since 65 to 69 m.y. old rhyolites were also emplaced along the fault, the I-NF system shows evidence of movement since that time. Miller and Bundtzen (1988, in press) have proposed a right lateral offset solution of 94 km since Late Cretaceous time for the I-NF fault. These workers suggest that volcanic stratigraphy in the Donlin Creek area (Iditarod A-5 Quadrangle) is equivalent to similar rocks in the Moore Creek area (Iditarod C-3 Quadrangle) to the northeast. (L)

P. Gold Placer Mining Developments in the Innoko-Iditarod Region, in A. H. Brooks and others, Mineral Resources of Alaska, Report on Progress of Investigations in 1910, U.S.G.S. Bulletin 480 1911, pages 267, 270

There's gold,
and it's haunting and haunting -
It's luring me on as of old -
Yet it isn't the gold that I'm wanting
So much as just finding the gold.
It's the great, big,
broad land 'way up yonder;
It's the forests where silence has lease;
It's the beauty that thrills me with wonder;
It's the stillness that fills me with peace.